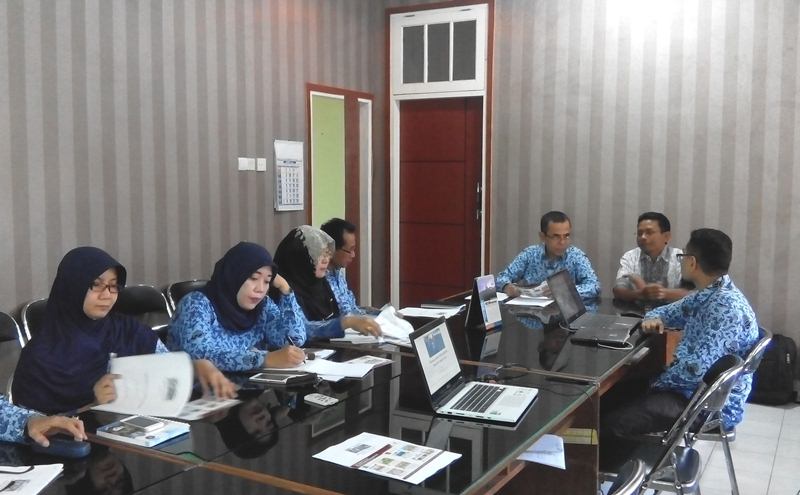 Presentation of the study results and socialization of the "Comparative Study on the Progress of the Elderly-Friendly City of Mataram" to Bappeda and related OPD within the Mataram City Government, Tuesday, May 2, 2017.

The term "the Elderly-Friendly City " is a brand-new phrase for the City of Mataram. It sounds strange to the ears of policymakers in the city. It was revealed in the socialization event of the team “Comparative Study of the Progress of the Elderly-Friendly City of Mataram" on Tuesday, May 2, 2017, at the Bappeda Room, South Building, 2nd Floor, the Mayor Office, at the 16 Pejanggik street.

This sentence came from the Secretary of the Bappeda of Mataram City, Rama Yoga when he opened and delivered the introduction to socialization. The socialization was mainly delivered by Amirul Arifin as the person in charge of the study in Mataram City attended by most relevant regional apparatus organizations (OPD) within the city government. These include the Public Works and Spatial Planning Service (PUPR), the Settlement and Housing Area (PKP), the Health Service, the Education Office, the Transportation Service, and the Mataram City Secretariat Research and Development Agency.

The statement from Rama Yoga above became the initial information for the study team in collecting data. He also confirmed to the study team that the City of Mataram did not yet have a regional Elderly commission according to regulations that should exist in every district/city. Several additional information points that corroborate the data were confirmed when the OPD representatives who present responded to the presentation that the initial information extraction in the socialization took place productively.

The education office even proposes a strategy to introduce an elderly-friendly city: the specific achievement target must exist, for example, a pilot in one village was carried out across sectors. The parks department who is in charge of the green open space even asked back: "What kind of friendly cities should be addressed"? "What should be done"? for example, "to take advantage of the uninhabitable housing program"?

Meanwhile, the public works office conveyed that many things were being done regarding elderly-friendly cities. For example, the construction of a special park for the elderly located at the end of Jalan Udayana in 2016 and the provision of local government work unit (SKPD) building facilities that are comfortably used by people with disabilities and the elderly even though it is only in a few buildings. At some points, the existing sidewalks are adequate and easily used by people with disabilities and the elderly. However, the public works service admits that the efforts that have been made have not been maximized because they do not only focus on facilitating the elderly. On the other hand, the Balitbang (research and development center) asked: "Did we have to possess the same indicators as other cities for an elderly-friendly city, considering that Mataram's conditions are different from the others"?

The health office expressed that previously had a section for youth and elderly (Aremasila) under the responsibility of the family health section. Especially for the elderly, the health office has provided service facilities such as puskesmas, posbindu, and elderly poly.

The transportation service conveyed no follow-up to the program of activities focusing on the elderly. Suggested indicators of special tariffs for the elderly in using public transportation can be applied in the future, or by trying to provide special transportation easily accessed by the elderly. It may collaborate with non-profit institutions such as zakat agencies.

Amirul conveyed in his presentation that the assessment instrument for the 2013 study was referring to the 95 assessment indicators in 8 dimensions of an elderly-friendly city compiled by WHO. He also confirmed that SurveyMETER sent the results and recommendations book of the study to the Mataram City Government by the post office. Based on the study assessment results, Mataram City scored 44.1 was slightly above the national score of 42.9 out of a possible score of 100. Meant, it already has the potential to create a more elderly-friendly city if there was a structured effort from the Mataram City Government to make it happen.

After extracting information during the socialization, the study team succeeded in digging further information about the elderly-friendly city policy in Mataram City by visiting interviews and direct observations at the social, public work, transportation, education, population and family planning affairs, parks, health, communication and information services, and Bappeda. The study team completed data collection on May 26, 2017. (AA/JF)