Parenting in a pandemic: will Covid-19 boost equality in parenting? 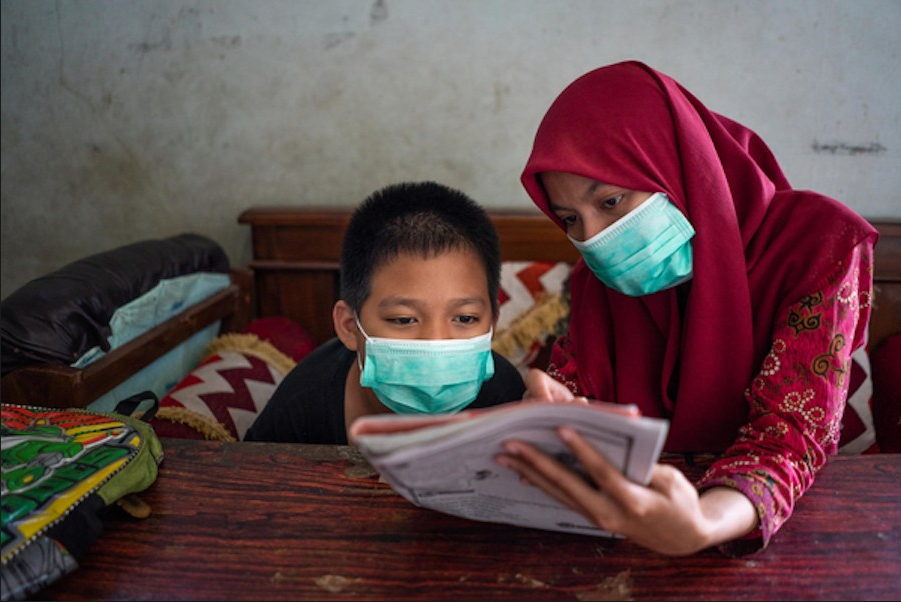 The Covid-19 pandemic has forced adjustments in every facet of life, including family life. Parents of children aged under five years have been challenged to adapt their households to rapidly changing conditions at work, at school and in public life. The result has often been a more intensive relationship between parents and their young children, with implications for early childhood education, as well as parents’ division of labour, employment status and mental health.

Under the age of five, children rapidly develop foundational knowledge and skills. Interaction with caregivers at this stage of life is a crucial building block for early childhood education.

SurveyMETER conducted a phone survey, supported by the Knowledge Sector Initiative, to investigate the state of parenting under-fives during the pandemic. We wanted to see how the impacts of the pandemic – including school closures, directives to work from home, and job losses – affected parents and children at this critical stage of life.

We received responses from 1,302 households with young children in a subdistrict of Nganjuk district, East Java – providing a limited but insightful sample for early analysis of pandemic conditions in the home.

The results showed both positive and negative impacts of the pandemic on parental interactions with young children, household economic conditions, the mental health of caregivers, and opportunities for learning at home. The survey also provides lessons for policy on early childhood education and support for new parents.

Parental interaction with under-fives increased by 38% during the pandemic, but work was not shared equally between mothers and fathers. Mothers remained the dominant parent, with 52.1% reporting similar levels of interaction to before the pandemic, and 44.4% reporting spending more time interacting with their children. Meanwhile, 44.4% of fathers reported no change to their pre-pandemic parenting, and 38.5% reported spending more time caring for children.

Care and attention from both parents is important for cognitive and emotional development for under-fives, and mothers and fathers can contribute equally. The idea that educating and caring for children is solely a mother’s responsibility is of course false but remains common in Indonesia, due to cultural and religious influences.

A draft bill on “family resilience” slated to be discussed in the House of Representatives (DPR) this year threatens to enshrine such outdated domestic roles in law, stipulating that mothers, and not fathers, are responsible for the care of children. This approach is not supported by research on childhood development, and many aspects of the bill continue to be widely criticised by academics, activists and the broader public.

Mothers often develop a close relationship with their children through pregnancy, birth and breastfeeding, leading to their subsequent role as the dominant caregiver. To encourage a more equal division of caregiving labour, fathers should be urged to accompany their partners to appointments at community health centres (puskesmas) and with midwives through pregnancy and delivery. They should also play a supportive role during breastfeeding.

Health extension workers, who provide basic health services and facilitate connections between health services and communities, can also play a role by equally providing mothers and fathers with information about parenting before birth. This can help fathers foster an earlier attachment with their children, and support children’s holistic development.

Unfortunately, the increased time spent with young children in some households was associated with a reduction in income. Income decreased for 70.9% of households during the pandemic, usually because of job loss. As many as 35% of breadwinner parents stopped work at some point during the pandemic, with 19.4% yet to return to work at the time of the survey.

Time spent with children increased sharply in cases where the breadwinner had stopped working and had not yet returned to work: 44.6% for mothers and 38.5% for fathers. In households where the breadwinner continued working throughout, there was still an increase of 30.8% of interaction by fathers, possibly because of directives to work from home, or fathers spending more time at home overall because of restrictions on public activities.

Increased domestic and economic stress also took a toll on parents’ mental health. Generalised anxiety disorder was found to have affected 24.1% of parents during the pandemic, with the highest level found among parents of 6 to 24-month-olds. An overwhelming 95% of those affected were mothers, with the highest rates reported by mothers who were spending more time on childcare. Households where the breadwinner had stopped working and income had decreased were also among the worst affected.

Stress on parents not only affects their own mental health, but can contribute to behavioural and developmental problems for their children. The disproportionate stress borne by mothers during the pandemic suggests that domestic and caregiving duties need to be more equally shared by mothers and fathers, to support the health of the family as a whole.

Early childhood education also took a hit during the pandemic, with formal education becoming unavailable, and children having unequal access to learning resources at home. Our survey asked parents about the range of learning materials they provided to children at home, from story books and colouring books to puzzles, building blocks, and technology-based tools like public television, YouTube and social media.

Concerningly, YouTube was noted as the dominant source of educational material, used by 60.2% of parents, followed by public television at 29.8% and social media at 25.4%. Internet-based tools were used more by households where income had increased or stayed the same during the pandemic than those where income had decreased.

Drawing and colouring introduce children to colours, and enable them to express themselves, improve their motor skills, and develop patience and creativity. Puzzles and building blocks stimulate soft motor skills, recognition of colours and shapes, and encourage imagination and problem-solving. Both activities should be equally available to boys and girls.

Of greatest concern, story books were only available in 10.7% of households. For households where income increased or stayed the same during the pandemic, the rate was only slightly higher, at 14.5%, suggesting that the problem goes beyond income levels. This is disappointing but not surprising given the widely documented low levels of interest in reading books in Indonesia.

Research shows that reading stories to children from an early age improves language and literacy skills, as well as language complexity and story comprehension. The Minister for Education has urged all parents to read to their children before bed to support their education and development.

The findings of the survey suggest that greater efforts are needed at the grassroots level, perhaps through community-based health posts (posyandu), to create a movement to encourage parents to read story books to their children from an early age.

The Covid-19 pandemic is not over yet, and its positive and negative effects on work, school, public life and parenting are likely to be felt for some time to come. The experiences of children and parents during the pandemic point a way forward for stronger policies that can better support new parents and their children’s development.

This small study indicates that fathers need to take a more active role in parenting to ease their partners’ workload and mental stress, and support the healthy development of their children. This can be encouraged by involving fathers in the early stages of pregnancy and breastfeeding through their attendance at health check-ups, and providing them with information on how best to support their partners and children, including by equally sharing in domestic duties.

In pandemic conditions or otherwise, more educational opportunities are needed for under-fives at home. Story books should be available, and parents – both mothers and fathers –  should take the time to regularly read to their children. This will not only influence early childhood development, but also improve Indonesia’s literacy levels in the long term.