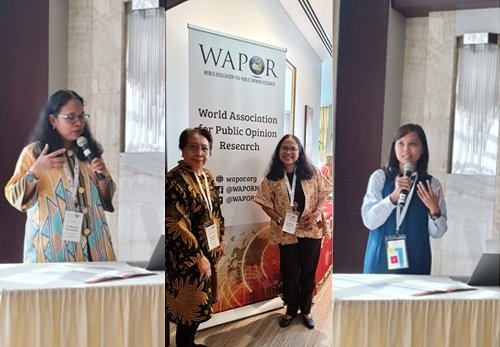 Established in 1947, the World Association for Public Opinion Research (WAPOR) is an international professional association of researchers in surveys and public opinion research. This year, the conference took “75 Years of Worldwide Public Opinion Research” as its theme, and presented the event with prominent speakers in public opinion research. Over 250 researchers from 57 countries attended the conference.

SurveyMETER – the only representative from Indonesia and first to attend the prestigious event – presented two papers in this forum using data from the 2018 World Values Survey (WVS). First paper “Parents’ perceptions on teaching social values and character to their children at home in Indonesia” was presented by Ni Wayan Suriastini, the Executive Director of SurveyMETER. It highlighted values of Indonesian parents’ inclined to be passed down to their children and also looking at parental background affecting this particular issue. Second paper “Internet access and perception on science and technology in Indonesia”, discussed by Dwi Oktarina, researcher from SurveyMETER, argued that people who accessed the internet daily were less likely to have stronger opinion on science and technology than their counterparts. Bondan Sikoki, the founder of SurveyMETER and co-author of the first paper, also present and participated in this event.

On-going conversation and publications with respect to public opinion from various countries around the world broaden knowledge and insight of the participants. Research focusing on public opinion is critical to ensure people’s voices are heard and democracy is being carried out properly.