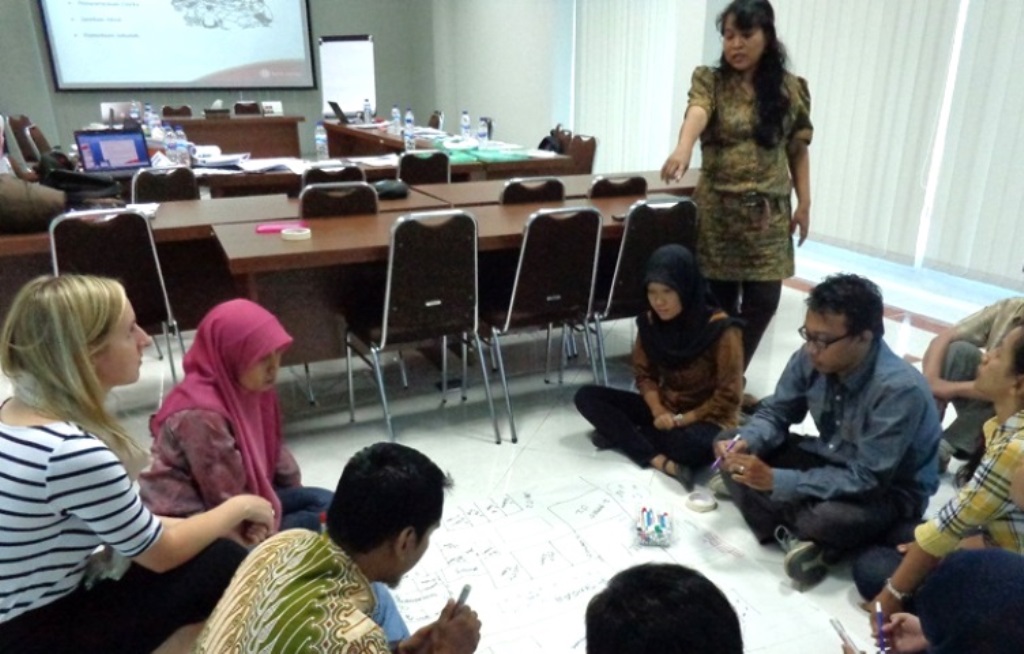 Sitti Hikmawatty, a child protection commissioner, was forced to apologise (link is external) in late February after making the false claim that pregnancy could occur through “indirect contact” between people of opposite sexes, including via water in swimming pools.

The outlandish claim was made in a recorded interview(link is external), in response to a question about the actions being taken by the Indonesian Child Protection Commission (KPAI) to address teenage pregnancy.

While revealing her own poor knowledge of the mechanics of reproduction, the commissioner recommended that parents speak to children as soon they reach puberty about the dangers of freely socialising with members of the opposite sex, as even “indirect contact” between male and female sex cells could result in pregnancy.

She gave the example of swimming pools as a potential “mediator” for “indirect” fertilisation, saying that “there are certain types of sperm that are very strong, and even without penetration could result in a pregnancy” for a girl or woman swimming during a fertile stage of her cycle.

The claims are laughable – and have since been widely ridiculed online (link is external)– but they also reveal some serious concerns regarding the state of adolescent sexual and reproductive health in Indonesia.

Adolescents in Indonesia face a relatively high risk of contracting sexually transmitted infections (STIs), and girls in particular are at risk of illnesses resulting from inadequate menstrual hygiene management, as well as the risk of unwanted pregnancy, or even death from complications during pregnancy or childbirth. Indonesia’s maternal mortality ratio is at around 177 deaths per 100,000 live births, and almost 10 per cent of maternal deaths occur among adolescents aged 15-19 years, according to national statistics. Actual numbers of adolescent maternal deaths may be even higher, due to underreporting of pregnancies and deaths through termination of pregnancy or childbirth.

Social taboos surrounding matters of sexual and reproductive health, while purporting to protect young people from engaging in undesirable behaviour, are actually putting their health and wellbeing at risk.

Sexuality is a sensitive topic in Indonesia. Parents are hesitant to discuss it with their children and, as demonstrated by the commissioner, many adults are not reliable sources of reproductive knowledge. As internet usage becomes widespread, adolescents increasingly seek information online, from sources of varying accuracy and validity.

Pop culture provides some insights—the Netflix series “Sex Education (link is external)” has become a topic of online conversation for Indonesian millennials, valued for its relaxed and humorous exploration of sex and sexuality (link is external), matters otherwise cloaked in mystery and taboo.

Local filmmakers have also made efforts to lift the lid on the issues. A film released last year called “Dua Garis Biru”(link is external) (“Two Blue Lines”) portrayed the typical experience of a teenager going through an unintended pregnancy in Indonesia. The filmmakers explored the problems faced by teens in accessing contraception, the consequences of pregnancy at a young age, and the importance of sex education for adolescents, suggesting that simply promoting abstinence may not be an effective approach.

The reality is that premarital sex in Indonesia is not uncommon, even though it is not socially acceptable. And to protect the health and wellbeing of teens, access to contraception and sexual and reproductive health services is needed. At present, condoms are widely accessible – though young people may be reluctant to buy them because of the associated stigma – while family planning services and other avenues of access to contraception are only formally available to married couples.

The national Basic Health Survey in 2013 reported a 1.97 per cent rate of pregnancy among teenagers aged 15-19 years. This implies that adolescents’ rights to sexual and reproductive health in Indonesia have been neglected, and highlights a failure to provide the necessary information and access to contraception.

Pregnancy during adolescence is associated with many negative consequences for health, education, and economic wellbeing. During pregnancy, adolescent girls are more prone to developing anemia than women who become pregnant in their early 20s. The condition increases the risk of having a preterm birth and can result in a low birth weight for the baby, as well as neonatal stunting or death.

During childbirth, adolescent girls face a higher risk of preeclampsia, obstetric fistula due to obstructed labour, and other complications that can result in maternal death.

Additionally, because of social pressure, girls who become pregnant as teenagers are often forced to marry young. They lose the opportunity to complete or continue their education, and face limited employment options throughout their lives. The burden of teenage pregnancy is disproportionately borne by girls. Boys, as the other contributing half to a pregnancy, tend to remain in school, and are spared many of the consequences to health and economic prospects faced by girls.

Another neglected aspect of sexual and reproductive health for girls is menstrual hygiene. Poor menstrual hygiene management is a known problem for girls in developing countries, including in Indonesia. A 2015 study conducted in collaboration by SurveyMETER, the Burnet Institute, and WaterAid Australia, funded by UNICEF, found that school girls in Indonesia faced obstacles in practicing good menstrual hygiene at school. A lack of washing facilities, including clean water and toilets, meant that girls could not change their sanitary pads regularly, and often resorted to wearing soiled materials for longer than eight hours.

Several studies have documented that unhygienic menstrual hygiene management practices such as these can result in bacterial vaginosis, a condition that can generate health risks such as preterm birth, acquisition of STIs (link is external) and pelvic inflammatory disease (link is external), which in turn can lead to maternal health complications, infertility, and cancer.

The sensitive nature of sexual and reproductive health means that data and information on the topic is limited. For example, data on STIs is often limited to statistics on HIV among high-risk populations such as female sex workers. Therefore, the prevalence of conditions such as bacterial vaginosis is likely underestimated.

Though risks can be minimised through early detection, social stigma and negative attitudes among health workers toward young clients mean that adolescents are discouraged from visiting health centres to seek advice on matters of sexual and reproductive health.

Research shows (link is external) that sexual and reproductive health education and counselling, as well as providing access to contraception, are the most effective ways to improve knowledge among adolescents, and reduce rates of teenage pregnancy. Providing sufficient sexual and reproductive information to young people, especially girls, can decrease rates of maternal and neonatal death, thereby supporting the government’s aim to meet the UN Sustainable Development Goals.

Despite this, the government has made little effort to act on the research and provide quality education and services to adolescents. In 2015, the Constitutional Court rejected a petition from the Indonesian Planned Parenthood Association (link is external) to explicitly include sex education in the school curriculum.

When sex education is provided in schools, it is limited to human biology lessons on the reproductive system, with no room for discussion about sexuality or contraception. The main message to students is one of abstinence, or avoiding social contact with the opposite sex altogether, as promoted by the KPAI commissioner last week.

The government, especially the Ministry of Health and the Ministry of Education, should overcome its fear of breaching social taboos and consider better ways to deliver sexual and reproductive health education to all adolescents.

Some controversy is almost guaranteed, but a bold step in this direction will not only help the government meet its international commitments, but will improve the quality of life for the country’s current and future generations.