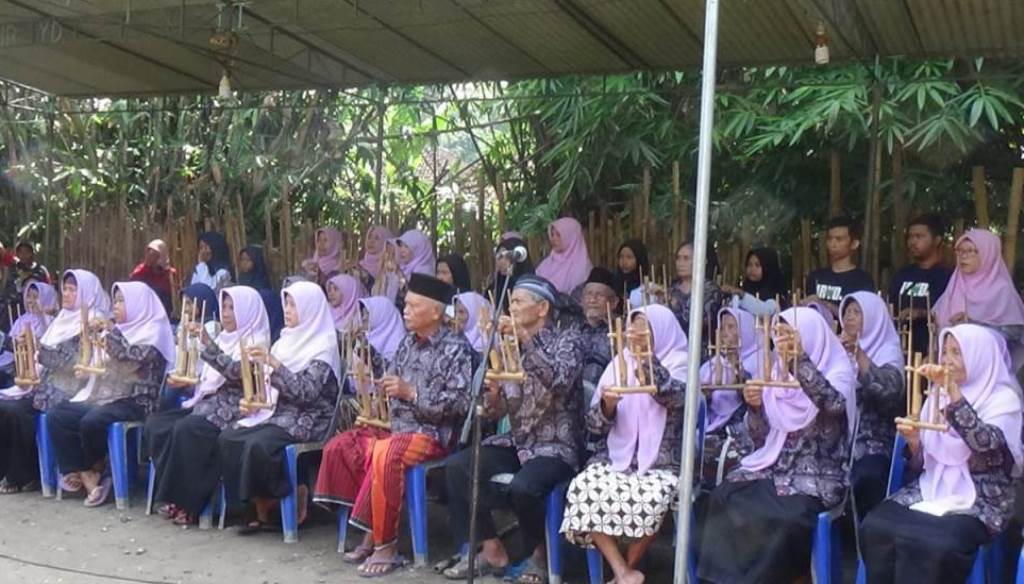 The Inter-Generation Angklung Nusantara Group was witnessed by the Deputy Regent of Bantul and other officials in the Inauguration of Taman Jati Prohibition of Iroyudan Hamlet, Guwosari Village, Bantul, Sunday (03/15/2020.

In his speech the Deputy Regent said that the existence of these attractions is expected to be able to improve the community's economy. Tourism continues to be encouraged and supported because it is part of improving welfare. "Of course we will continue to promote the existence of this tour and become a new destination in Bantul Regency," he said.

Taman Jati Larangan was built since November 2019 with self-funding from residents of RT 01 Iroyudan hamlet. They donated from Rp 10,000 to millions of rupiah according to their respective abilities. Park design is a combination of several concepts, namely culinary tourism, cultural tourism, nature tourism and sports tourism. Because of its location under the mountains there are many distinctive and beautiful photo spots including the village elders' tomb complex, namely Mbah Iroyudo and Mbah Danang Joyo, many palm-roofed gazebo and green trees.

The performance of the Angklung Nusantara Inter-Generation Group consists of three generations, namely the elderly, youth, and elementary school age children. They performed 3 songs: Ibu Kita Kartini, Tanah Airku and Indonesia Pusaka. Their appearance is compact and neat spirit especially because they wear new batik uniforms which are  gift from SurveyMETER for the elderly, in celebrating its 18th anniversary.

In the future, the Taman Jati Larangan complex will become a center of community activity in Iroyudan and surrounding areas. Including being a training ground and stage for Angklung Nusantara Inter-Generation Group. (TPA / JF)