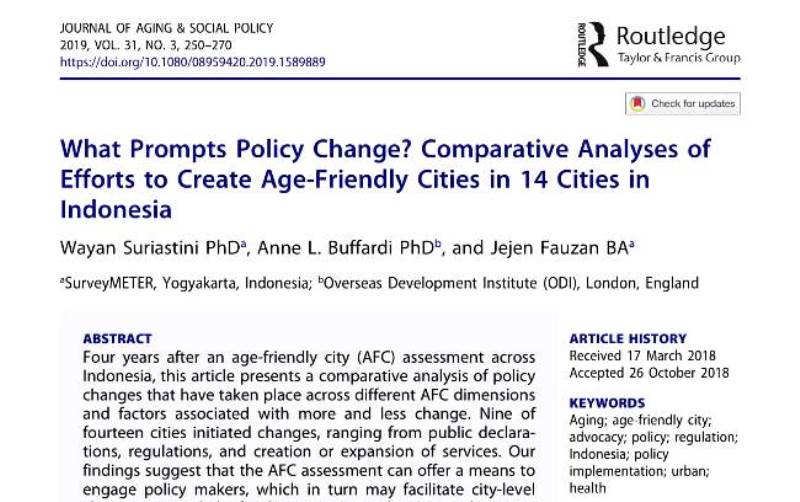 In 2007, the World Health Organization (WHO) launched a global guide to Age-Friendly Cities (AFC).  This global guide is intended to help efforts in improving health, participation and elderly security and respond to the two global trends namely globalization and aging population.

In 2013 SurveyMETER conducted a Study about the Capacity Assessment of Elderly Friendly Cities in 14 Cities in Indonesia.  The results in various cities, the sample’s absorption and implementation of initiatives by Age-Friendly Cities that have developed at different rates.  From those who have implemented it to those who have not yet developed an initiative at all.  In the 2013-2015 SurveyMETER published and sent the results of the study to all sample cities. Also, by utilizing the network, SurveyMETER is quite intensive to disseminate the results of the study to a number of sample cities and regional and national stakeholders. Post-dissemination, several cities show an encouraging initiatives such as in Balikpapan, Denpasar, and Jakarta.

In 2017 SurveyMETER conducted a Comparative Study on the Advancement of Friendly, Elderly Cities in the 14 Cities of the sample.  The aim is to compare cities that have and have not taken steps to address the needs identified in the 2013 assessment.  The findings suggest that the assessment of the capacity of elderly friendly cities based on the AFC guidelines can offer a way to engage policy makers, which in turn can facilitate changes at the city level.  Especially for big cities with more substantive and more consolidated budgets. However, in general, the developments in most cities are still stuck in place, significant initiatives have not yet grown. Therefore, based on the result, the next question is “does it need a policy change?”

The results of the latest study have been published in the form of paper in the Journal of Ageing & Social Policy on April 23 2019  with the title "What Prompts Policy Change? Comparative Analyzes of Efforts to Create Age-Friendly Cities in 14 Cities in Indonesia ".  Following is the link to access the paper: