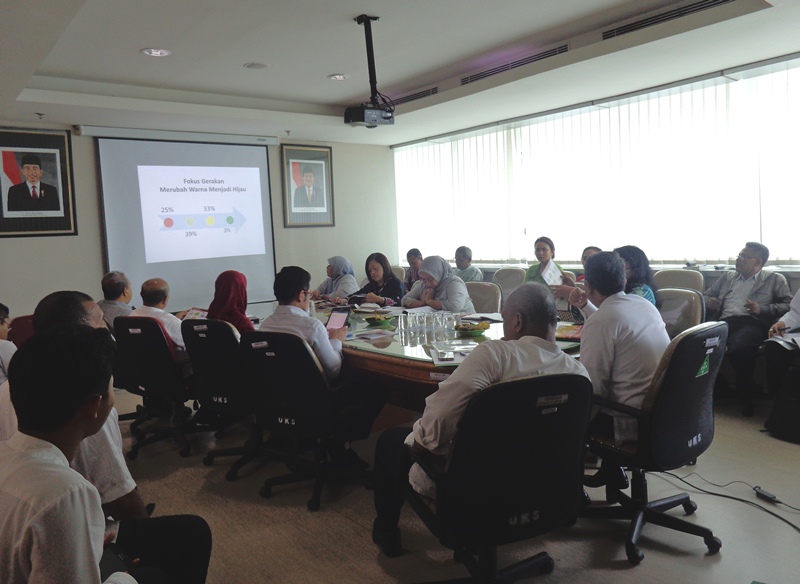 SurveyMETER as the initiator of the elderly-friendly community movement attended a formal hearing with the DKI Jakarta Provincial Government that took place on Thursday, January 5, 2016, at 09.00-11.00 a.m. in Meeting Room 1 of the Social Welfare Bureau, Blok G 19th Floor, Jakarta City Hall Complex.

During the hearing initiated by the initiator of the movement, Dr. Ni Wayan Suriastini as the SurveyMETER Executive Director and the staff Tri Rahayu, accepted by Fatahillah as Assistant Governor for People's Welfare, Regional Secretary of DKI Jakarta Provincial Government. In addition to Fatahillah, dozens of officials and staff related to the service program in the interest of the elderly, namely from Bappeda, Bureau of Social Welfare, BLU TransJakarta, UPK Monas, DPPAPP, Parks and Cemetery Service that joined to the Forestry Service, Highways Service, Bureau of PKLH, Department of Transportation, Ragunan Wildlife Park, Department of Social Affairs, Department of Health, and Department of Human Settlements.

Fatahillah said on this occasion that the Social Welfare Bureau acquired a mandate from the Acting Governor of DKI Jakarta to chair the audience meeting. He expects that the completed study on the elderly-friendly city can encourage Jakarta to become more elderly-friendly. It might be observed to the efforts performed by the relevant offices whether any shortcomings existed or whether any circumstances should improve until the results of the activities become good to future program inputs.

Responding to the study results, especially on the dimensions of civil participation and employment that are still red, Fatahillah revealed there is a plan based on a proposal from the DPRD that the elderly in DKI Jakarta will receive cash assistance of 1 million per month but insisting by the study result, the elderly need to be active, opportunities to work exist, being happy with working as they become healthier, as well as providing supportive training until the proposal for providing cash assistance to the elderly requires to review seriously.

Based on the study results of the Declaration of Jakarta Episode as a Dementia Friendly and Elderly-Friendly City, according to Wayan Suriastini, Jakarta is a pioneer in establishing an elderly-friendly city. The DKI Provincial Government set up partnerships with NGOs to encourage the establishment of Jakarta as an elderly-friendly city. Jakarta is already categorized quite well in the indicators of buildings and open spaces and health, for example, all elderly are free of charge to access health services which is the best practice for other cities. Since the declaration of DKI Jakarta as a dementia and elderly-friendly city, the Provincial Government has achieved many developments such as the construction of many child-friendly integrated public spaces (RPTRA), Transjakarta provides free services for the elderly, the existence of the purple crews who assist the elderly, and sidewalks that are friendly to the elderly and people with disability.

The responses from the participants from the government work units in the hearing were almost similar. They will support all efforts of the DKI Jakarta Provincial Government in establishing an elderly-friendly community. They perceived investment in the elderly-friendly was currently huge, but the benefits would be far greater in the long run. Examples of program activities carried out by the social service are food subsidy, nursing homes, training to produce bracelets, brooms, etc. The National Monument Park and Transjakarta have a free admission program for the elderly. DKI Jakarta has been optimal with the governor's regulation in the health sector regarding the waiver of the cost of health services, free for all residents who possess a DKI Jakarta ID card. From the target of 1 RW 1 RPTRA, DPPAPP has been building 127 RPTRAs so far. The facilities as open space and also for education are used by people of all ages, from newborns to the elderly. Then the forestry service has built the elderly park in Ayodya.

Regarding the continuation of future studies, the Social Welfare Bureau invited SurveyMETER to visit each related government work unit (SKPD) to complete the requested data. (TR/JF)