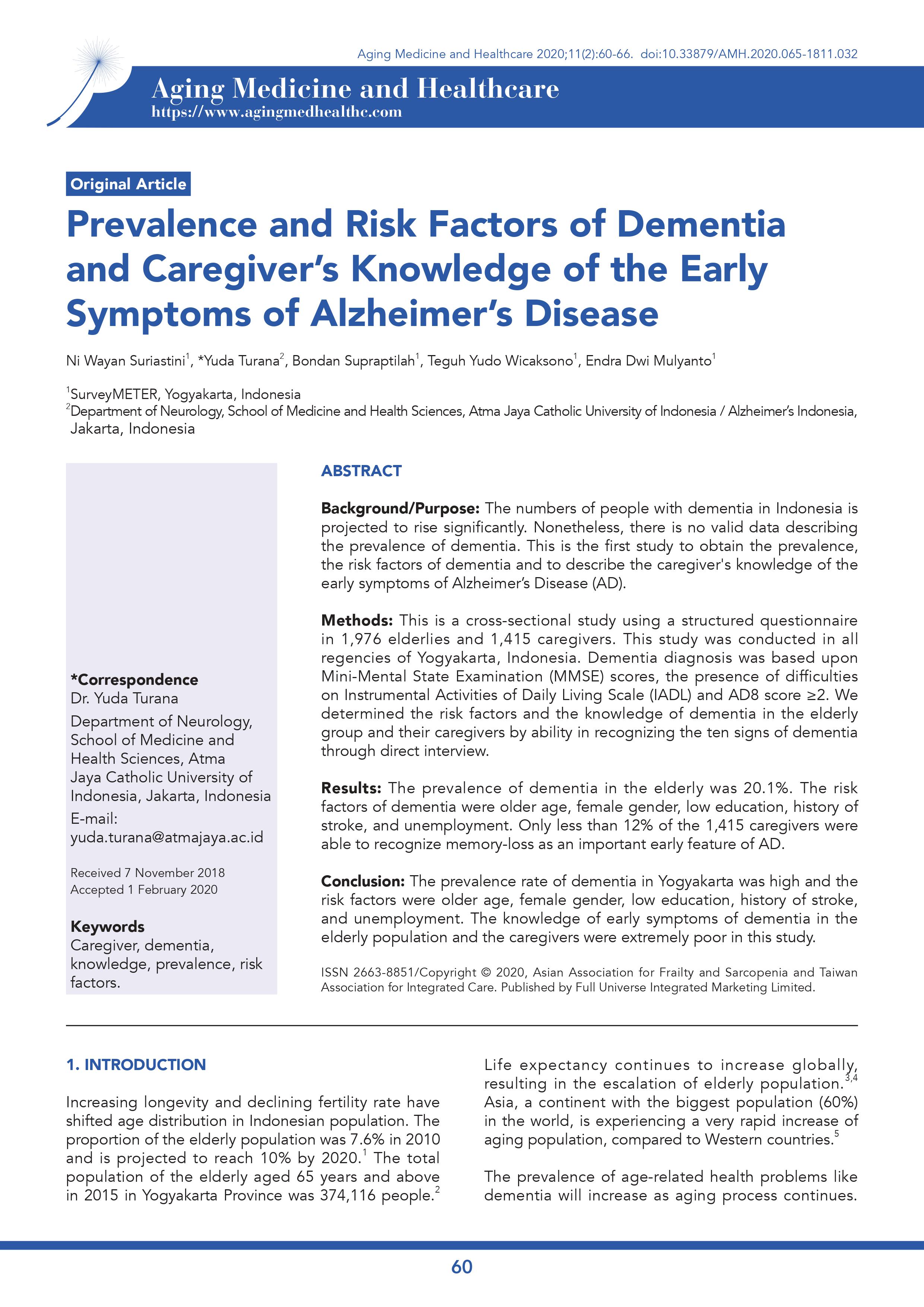 The number of people with dementia in Indonesia is projected to increase significantly. However, there are no valid data that explain the prevalence of dementia. The study, which was carried out in the Special Province of Yogyakarta in December 2015, is the first study to find the prevalence, risk factors for dementia and to describe caregiver knowledge about early symptoms of Alzheimer's disease (AD).

There is an exponential relationship between dementia and old age. By combining several studies, the rate of dementia will double with every 6.3 years of increasing age, from 3.9 per 1,000 people at 60-64 years to 104.8 per 1,000 people over 90 years.

At present, there is a misunderstanding among family members in Indonesia related to dementia. Many family members or the community in general feel that memory loss and cognitive impairment are part of the normal aging process. Lack of awareness of the early symptoms of dementia among caregivers creates a substantial challenge in detecting this debilitating disease.

Life expectancy continues to increase globally, resulting in an increase in the elderly population. Asia, the continent with the largest population (60%) in the world, is experiencing a very rapid increase in relation to an aging population, compared to Western countries. The prevalence of age-related health problems such as dementia will increase with the aging process.

The World Alzheimer's Report estimated in 2015 that there were 46.8 million people living with dementia worldwide. The prevalence of dementia in elderly people aged 60 years in North Africa and the Middle East is between 5.75% to 8.67%. Studies show the prevalence of dementia in DIY (Indonesia) is higher (20.1%) compared to other countries. In this study, the majority of respondents had low education and lived in rural areas.

Findings
This research objectively shows that the prevalence rate of dementia in rural / remote areas such as Gunung Kidul Regency is higher than in other regions. The difference in the prevalence of dementia is caused by differences in topography in each region. Most of Gunung Kidul Regency is rural area, compared to Bantul and other districts.
Agriculture is the main occupation and there are not many job opportunities that can stimulate cognitive memory in society, especially the elderly. Different lifestyles, health awareness levels, and health conditions contribute to the prevalence of dementia. People in urban areas tend to be better educated, and they are more involved in various activities that stimulate the brain compared to those who live in rural areas.

Stroke can also increase the prevalence of dementia. The study also revealed that half of the subjects diagnosed with dementia had a history of stroke. Several studies indicate that stroke may trigger various pathologies including those associated with subcortical vascular dementia, multi-infarct dementia, and dementia infarction. The risk of dementia has increased 6 times in the five years after a stroke. Even the risk of dementia has increased since the previous five years and continues more than 11 years after the stroke, with the highest risk occurring within one year after the stroke. Stroke affects the hippocampus and white matter of the brain, thereby contributing to the pathogenesis of post-stroke cognitive impairment.

In this study, no significant relationship was found between hypertension and diabetes mellitus and dementia. These results are similar to other studies showing that the two factors are still being debated as risk factors for dementia. Diabetes mellitus is not associated with dementia in large clinicopathological studies.

The elderly who are still actively working have a lower risk of dementia compared to those who are not working. Work is considered a social and cognitive activity. Research by Marioni, et al. Show that factors such as increased social involvement, physical activity, or intellectual can reduce the risk of dementia.

Knowledge of the early symptoms of dementia in caregivers in this study was poor. Surprisingly, only less than 12 percent of caregivers can identify memory loss as a symptom of dementia. Caregivers who have a better insight into the early symptoms of dementia contribute to making an early diagnosis by seeking medical consultation. They can provide early warning to family members and health workers by observing the initial symptoms. The caregiver's knowledge is also important in making the decision to provide care for the elderly.

The results also showed that caregivers were more likely to assume that memory loss was part of normal aging, the results were almost the same as a systematic review by Cahill S et al. knowledge of dementia is quite low, especially in countries with low to medium income levels.

Conclusion
The prevalence of dementia in this study is high. Common risk factors are older age, low education level, history of stroke, and unemployment. Elderly and caregiver's knowledge of the 10 initial AD symptoms is unfortunately quite poor. Data prevalence and level of knowledge about AD must be provided. Evidence based information to all parties should be clear enough to begin evaluations to increase awareness of symptoms, including early symptoms in the prevention and treatment of AD.
------
Thus the summary of a working paper entitled "Prevalence and Risk Factors of Dementia and Caregiver's Knowledge of the Early Symptoms of Alzheimer's Disease," published in the Aging Medicine and Healthcare Journal 2020 Edition; 11 (2): 60-66 (www.agingmedhealthc.com). The working paper can be downloaded at the link:
https://www.agingmedhealthc.com/wp-content/uploads/2020/06/v11i2_5_jcgg…