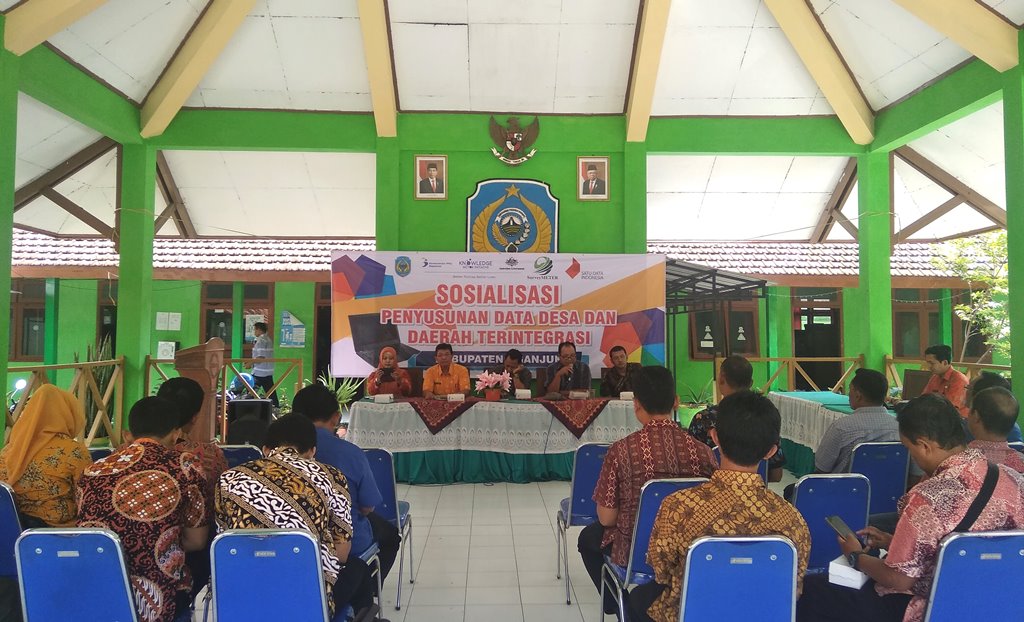 The Socialization of Village and Regional Data Compilation of Nganjuk Regency in the Hall of Patianrowo Subdistrict was followed by 11 Villages, Thursday (02/27/2020).

Field stages expansion of the study of the Integrated Household and Individual Data-Based Stunting Handling System (TEPAT RAMAH) began with program socialization activities to all districts and villages in Nganjuk Regency. Thursday (02/27/20) the first socialization was held in the Hall of Patianrowo District, as a pilot study district.  Participants in the socialization were all villages in the Patianrowo District and related institutions at the district and sub-district level. Two people who were interested in the village attended the activity, namely the village head and the staff in charge of the village profile compiler.

The series of socialization activities opened by Edi Srianto as Patianrowo Sub-District Head, then an overview of activities by Purwanto Hari as the Head of Statistics and Information of the Public Communication Office of Communication and Information, discussion of financing schemes by Ovie Andrianto as Head of Community Empowerment and Community Empowerment Office of Nganjuk District, and an explanation of the substance and technical activities by Roni Hermoko as the coordinating committee of the activities of SurveyMETER.

Hari Purwanto expressed his hope that this program could not be carried out casually but rather fully supported by the village government. Because if every village fills in their profile with the right data, it will bring up the real potential of the village which indirectly promotes the village itself until the possibility of interested ones coming from abroad. "Hopefully with the synergy between the village and the region this Nganjuk can be turned into one data," Hari said.

Whereas Ovie said that the data compilation program was a proof of integration in the interests of villages and regions.  Ovie also invites all village governments to account for financial assistance from the central government which amounts to billions of rupiah with accurate development data according to the system currently being designed by SurveyMETER and Nganjuk Communication and Information Technology.

While in the explanation session and briefing on the technical plan of activities to the person in charge of data and village profiles, Roni Hermoko began his presentation by conveying what SurveyMETER had done in collaboration with the Nganjuk District Government through the Health Service and 11 villages in Patianrowo District from 2018 until now. That the sub-districts and 11 villages in Patianrowo already have quality data dashboards, which can be utilized both for the preparation of village profiles, development planning, and others.  The dashboards can be updated by each village at very affordable costs by the village budget fund. "So in the future in the future expansion of our study, we are all the spearheads for the quality of the data produced," said Roni while inviting all participants to be coordinators in each village to coordinate the data cadres.

In this long series of activities the Nganjuk Diskominfo as the data guardian of the Nganjuk Regency is SurveyMETER's working partner acting as the PIC program of the Nganjuk District Government. Diskominfo Nganjuk through Nuri Prihandoko as the coordinator of the field technical implementer from the office will arrange a schedule and route for outreach to the 19 other districts that will begin in March 2020. (JF)

The following is the publication of these activities on the local media online portal: