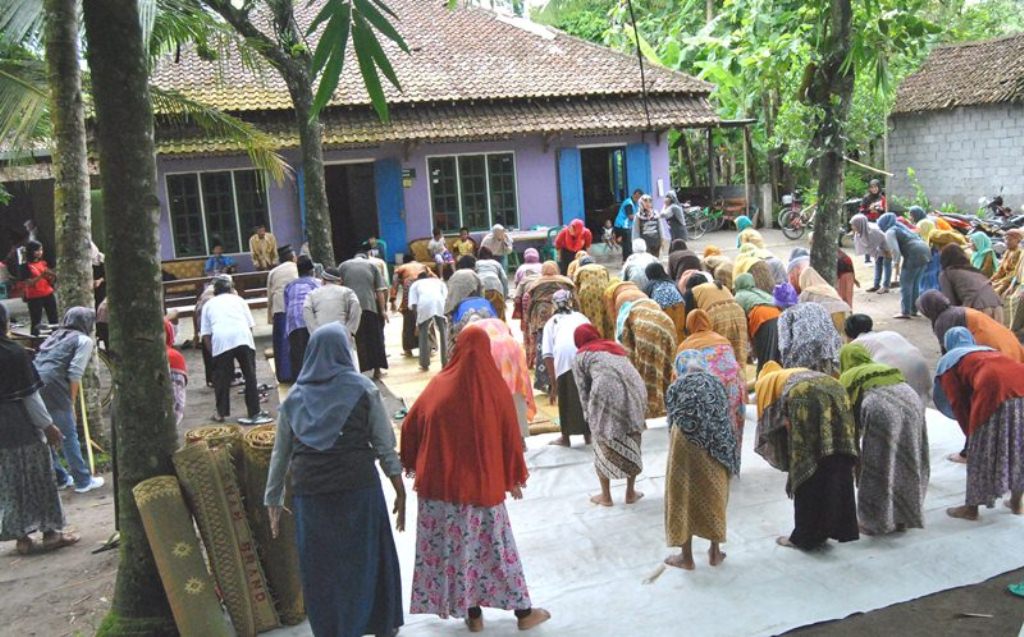 We arrived at the hamlet head house less than ten minutes from nine in the morning when the program started. It seems that tens of elderly and posyandu cadres have been waiting for our arrival. Some of them even came before seven am. They waited for us (and the village head) for more than 30 minutes in the living room and in the lobby, after the weight checks, blood pressure checks, and eating supplementary food (PMT).

Our enthusiasm was fueled by theirs. They just obeyed when we asked to move by sitting on a mat in the courtyard of the house. They were also loyal to remain still at the place when the morning drizzle had fallen for a moment. We expect the enthusiasm will be a good start for future program implementation.

Sunday morning December 31, was a special event for them and of course also for us. We called the activity on the last morning of 2017 the “Iroyudan Hamlet Elderly Gathering Activity” to mark and welcome the assistance program for the Bougainvillea Elderly Posyandu activities in Guwosari Village which was conducted by SurveyMETER as of January 2018. It is a small program of SurveyMETER in an effort to create an elderly-friendly community. The Iroyudan became the second hamlet that was accompanied after Watugedung.

“Starting January next year, the service for the elderly posyandu will be separated from the toddler one. Every implementation will carry out health checks and elderly gymnastics with varied materials and agendas. We also schedule a home care program for the elderly who are bedridden (got sick and being only lie down at home)”, said Titis Putri Ambarwati, program coordinator, in front of the audience.

“I expect all of the elderly to enthusiastically participate in posyandu activities since by being active in Posyandu may find out about health. Health is very important and we must take care of it constantly. In addition, posyandu is also a melting pot for friendship and chatting with others,” said the Village Head of Guwosari Village, H Suharto, in his remarks. He also thanked SurveyMETER for expanding the range of assistance.

Furthermore, a series of activities ran smoothly, naturally, and enjoyably. All audiences were enthusiastic when invited to play anti-senile gymnastics. Their smiles and laughter broke out between movements. Some of them who are unable to do so participate while sitting.

They also nodded in understanding when a SurveyMETER researcher, Endra Dwi Mulyanto, explained the results of a study on (and the importance of) posyandu for the elderly conducted in Bantul regency. He conveyed the results of the study in easy-to-understand language, including when recommending an increase in the allocation of village funds to support posyandu activities for the elderly. He added that based on the study results, the joint task is to encourage the activity of male elderly are far below the female one. “Health is the capital of life." In addition, being active posyandu for the elderly is part of the spirit of the Healthy Living Community Movement (GERMAS) promoted by the Indonesian Ministry of Health," he said. Having completed the presentation and representing the management of SurveyMETER, he symbolically delivered a set of Portable DVD Players to assist the posyandu cadres in learning various exercises for the elderly.

After a while, they were invited to remember their youth and childhood. The male elderly are welcome to create something originating from palm tree leaves while the female ones from banana leaves. A few minutes later the Master of Ceremony called the first finisher to show his creation. He came forward to approach the MC with a woven keris in hand. An eccentric creation from him was greeted with boisterous laughter from others. The atmosphere was shining and lively. By his agility, he was awarded a door prize.

Then some grannies scrambled to get to the MC, showing off their creations in order to get gifts. Two grannies snatched to compete for their creations showing off their work, followed by the others. We and the cadres certainly provide excess gifts so that all the participants get a share. In addition to woven keris, several other creative products are produced ranging from various types of diamonds, whips, birds, propellers, trays, plates, pads, wrap, and similar foods packaging.

To avoid scrambling over the gifts, the MC changed the terms for getting a gift by allowing them to show their "hidden talent". A grandfather who claims aged 95 years old started by singing the national anthem, Indonesia Raya. The alternating and back-and-forth pronunciation of the verses and the hoarse voice (maybe because of his missing teeth) made the atmosphere full of laughter and admiration. Then a granny asked to sing Indonesia Raya again. She became the conductor with enough appreciation that she was able to echo Indonesia Raya for the second time quite well and completely. Ultimately, a grandfather consolidated the festivities of the event by singing literary art songs full of advice.

On the morning of the last day of 2017, we really had a great time, that was fun, we were certainly proud, happy, entertained, and grew excited looking forward to 2018.