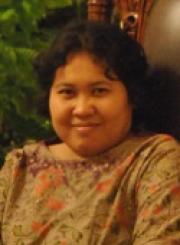 She graduated from Law major at Gadjah Mada University in 1997. She joined SurveyMETER in 2002. Her research career began in 2002 as an interviewer at HATAS / WISE (2002-2003) and WISE (2003 - 2007) as a café editor. In 2007-2008 as editor of the IFLS4. In 2009 she became a local supervisor in the WISE Survey. Besides taking part in several other surveys such as the Bird Flu Survey, P2KP, and KPEDA she also serves as data cleaning coordinator at the METER Survey office. Since 2010 she held the position of Training Manager to manage training activities, workshops, and seminars organized by SurveyMETER. Aside from being a Training Manager, she is also a staff in the procurement of goods and logistics. Currently, she is conducting research and writing on the Study of Elderly Health Services (Puskesmas Santun Lansia) in the Special Province of Yogyakarta.