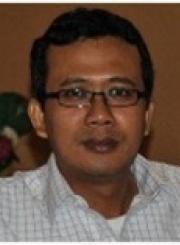 Born in Banjarnegara June 20, 1974. He completed his Master degree in the Master in Public Administration at Gadjah Mada University in 2012. Started his research career from IFLS 2000 as a Local Superintendent, then was involved in the WISE Survey with SurveyMETER in 2001-2005, followed by experience coordinating Tsunami Aftermath activities and Recovery in North Sumatra from February 2005 - March 2007.

Later he was involved in the 2007 IFLS as a Field Coordinator. In 2008 gained additional experience in the study of Poverty through the Indonesian Household Socio-Economic Survey. In the same year, he was involved in the Local Government Capacity Survey (KPEDA) in the West Papua Region, followed by other studies, namely the Avian Influenza Survey, School Based Management, a Study of Vocational Training Centers and the Rural Household Survey in 2011. Now he concentrates on assistance and development region as one of the structural divisions of SurveyMETER, specifically the theme of policy and poverty.