It is Possible to Lessen the Dementia Symptoms 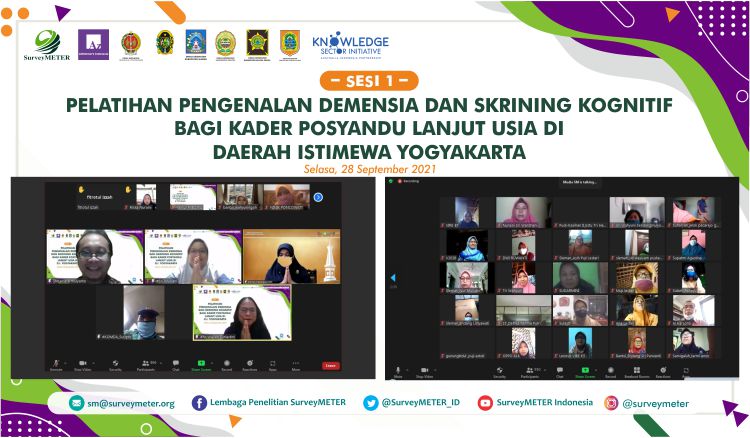 It was stated by the Governor of the Special Region of Yogyakarta (DIY), Sri Sultan Hamengkubuwono X, in his written opening remarks read by the Head of the Health Office, Pemjun Setyaningastutie, DDS., M.P.H., in Session 1: “Training on Introduction to Dementia and Cognitive Screening for Elderly Posyandu Cadres in DIY”, Tuesday, September 28, 2021.

Sultan conveyed, the government has solicited to manage the elderly while still paying attention to their skills, age, and physical condition socially and economically productive. Improving the quality of elderly health services refers to the Minister of Health Regulation No. 67 of 2015 concerning the Implementation of Elderly Health Services in Community Health Centers. Regardless of that, the Sultan also conveyed the elderly quality of life decline is certain and unavoidable as a result of deteriorating physical and cognitive health that appears degenerative but is very possible to lessen.

"Dementia is one of the diseases due to decreasing cognitive function as one, several, or certain conditions combination that usually characterized by Alzheimer's. It is caused by damage to brain cells that interferes with communication between cells, but that doesn't mean it always characterizes the elderly," said Sultan in his written remarks..

The online training was attended by more than 900 health cadres and relevant policymakers from 5 districts/cities throughout DIY, BKKBN, and the Chairperson of the DIY Elderly Commission. It was held in collaboration with the Yogyakarta Special Region provincial government, regency/city governments throughout DIY, and Alzheimer's Indonesia Chapter DIY, with the support of the Knowledge Sector Initiative (KSI).

The training material was delivered by Sri Mulyani, S.Kep., Ns., M.Ng, a lecturer at the Faculty of Medicine, Public Health and Nursing (FKKMK) of Gajah Mada University Yogyakarta who is also the coordinator of Alzheimer's Indonesia (ALZI) Yogyakarta Chapter. She discussed topics of What is dementia; The signs and symptoms of dementia; The stages in dementia; The types of dementia by the cause; Differentiating dementia and non-dementia; Explaining the various types of early detection of dementia.

The second one is Endra Dwi Mulyanto, S.E., M.P.H., a researcher in the SurveyMETER community-based elderly health study in DIY in 2021. During the training, he also introduced how junior researchers of SurveyMETER collect the data screening through practice interviews.